It is no secret that I am a big fan of Quay Commons (QC). Many of my favourite habits – my daily coffee (a flat white, if you’re buying), weekend loaf, occasional lunch, Friday baked treat, and post-work drinks in the sun – are nourished by the lovely folks there. I still dream about the first time I dropped in for lunch – the most amazing roasted lamb sandwich with roasted peppers and yoghurt, on their award-winning sourdough. Sublime. As a result, I was very excited when I was invited along for an evening of wild beer and food pairing in conjunction with Little Earth Project (LEP) brewery.

QC is run by the team behind Gardener’s Cottage (my review of Gardener’s here), and the communal vibe of the cafe’s critically acclaimed sister is recreated for the tasting. I arrived early, and took up a position at the best seat in the house, entirely by chance. I was sat next to Tom Norton, LEP’s founder and brewer; his partner and collaborator Dani; and Jenny from ScotBeer Tours. Esteemed company – and, much to my delight, guaranteed geekery!

I thought I wasn’t a big fan of sour beers before this evening – I have had some howlers in the past (naming no names) – but I’m always game for new experiences, and I knew the food would be amazing. However, the beers, were phenomenal! The wild fermentation process brings out all sorts of funky and interesting flavours, which are often bulldozed in super-hoppy and commercial beers. With LEP’s beers, the flavours continue develop long beyond the maturation and bottling – in a manner I have always associated with wine. Indeed I think wild beers share a similarity with wine – key to the premise of this evening – in that some are very approachable and eminently quaffable, whilst the delights of others are really unlocked and transformed by food. 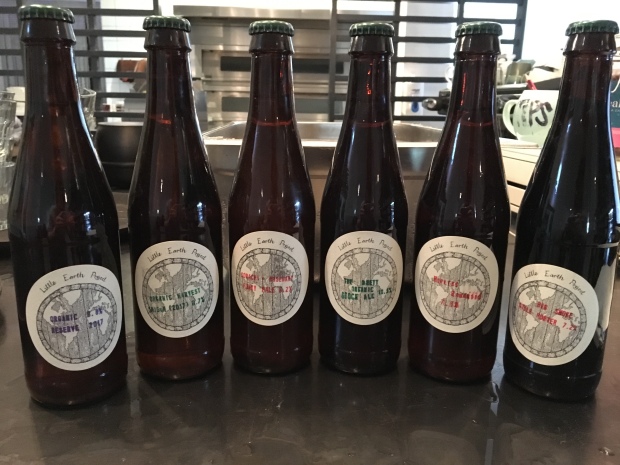 The six course menu quivered with an inventive flair – beer and food held in perfect creative tension. Each beer was introduced by Tom with fascinating historical anecdotes and insights into the brewing process. As a born-again fermenter, I was in my element. 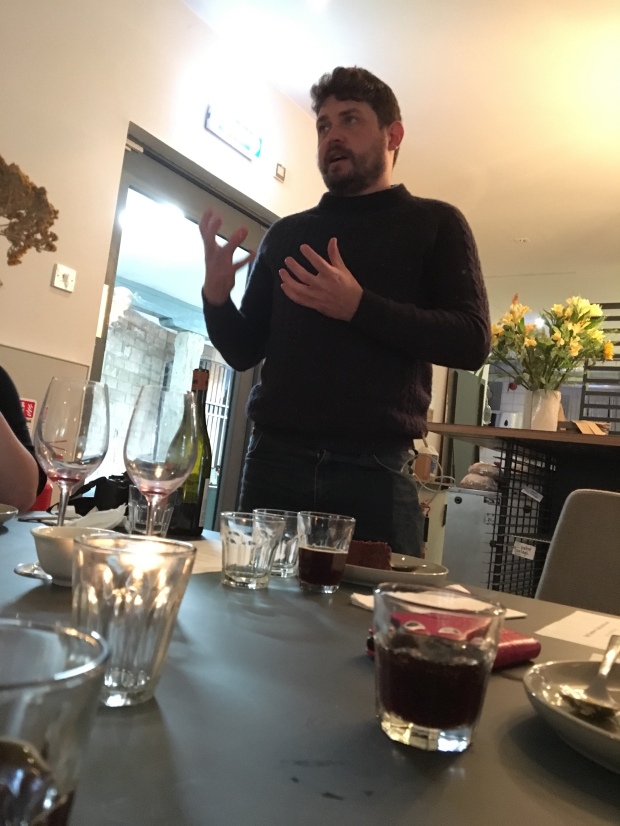 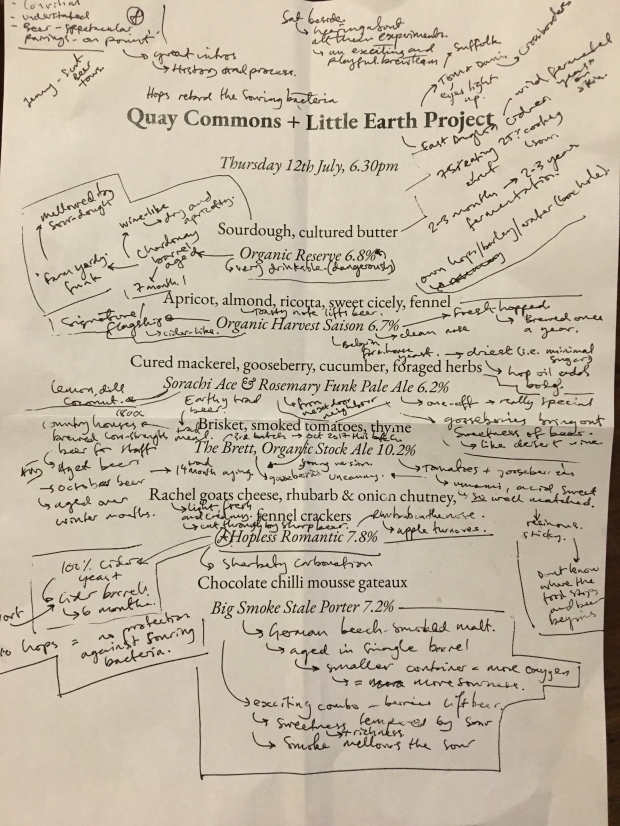 Highlights from the evening included: a dangerously drinkable (at 6.8%) Organic Reserve displaying a pleasing earthiness which Tom described as a ‘farm yardy funk,’ paired with QC sourdough and cultured butter; a Sorachi Ace & Rosemary Funk Pale Ale (6.2%) vibing along with sweet and salty cured mackerel, gooseberry, cucumber, and foraged herbs – the sharpness of the fruit mellowing the sourness of the beer and bringing out the sweetness of the rosemary; A melt-in-the-mouth pulled brisket with smoked tomatoes and thyme, paired with a youngish traditional Stock Ale (called The Brett) (10.2%) which amplified the sweetness, acid and umami; and finally – the match of the night, for me – goats cheese, rhubarb and onion chutney with a hopless sour (cleverly named Hopless Romantic) brewed using cider yeast. This last beer blew me away with its sherbet fizz and sharp appley tang, cutting through the creamy cheese with such aplomb that I couldn’t quite tell where the beer ended and the food began. 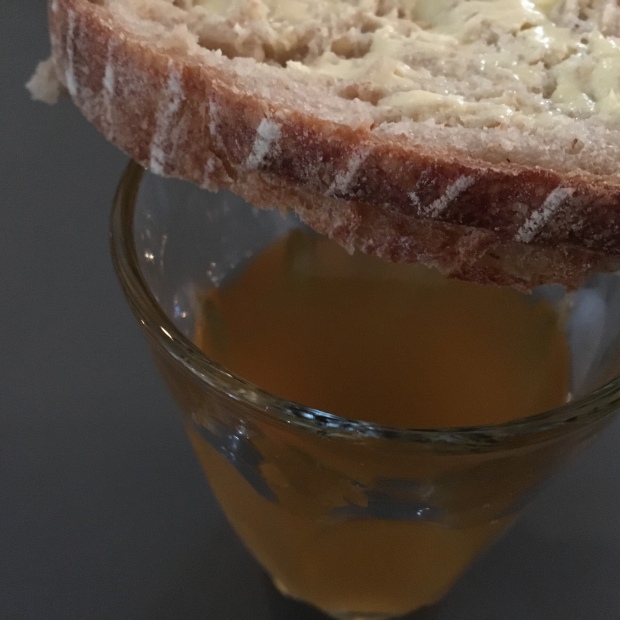 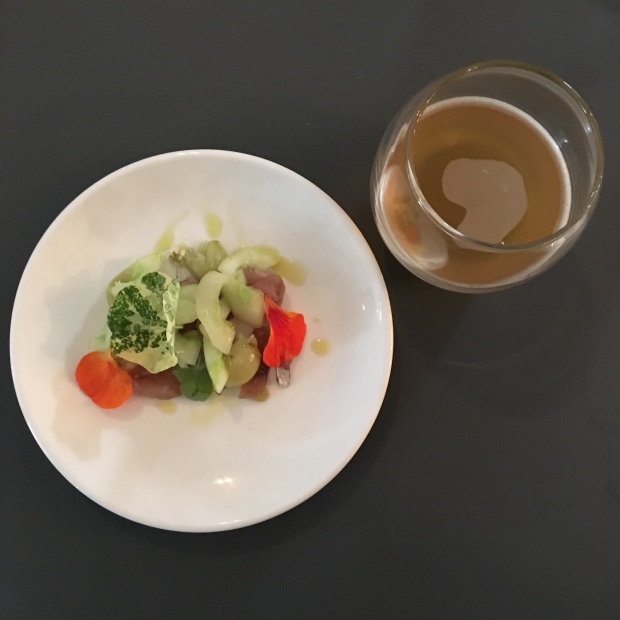 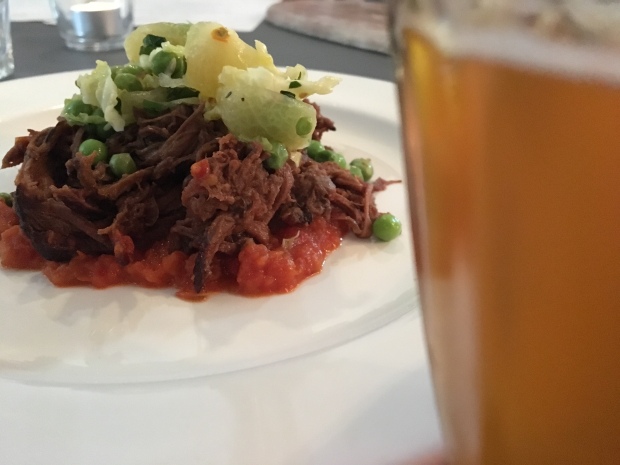 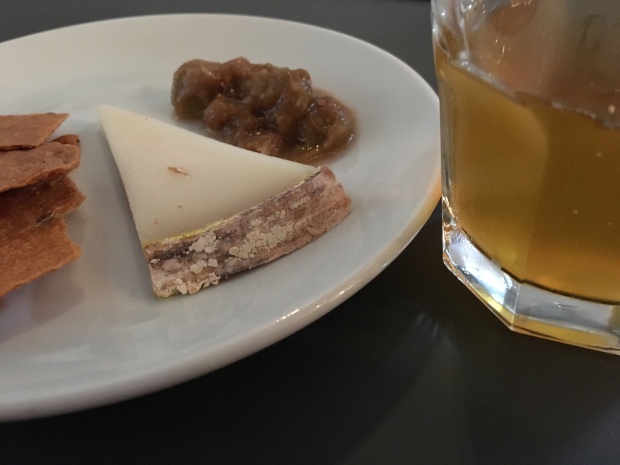 This was a truly fantastic evening of conversation, food, and drink. The beers were spectacular, and the food superlative – only improved by their carefully arranged marriage. I can tell you which were my favourite beers (a clear winner in Hopless Romantic, with Sorachi Ace & Rosemary Funk Pale Ale really holding its own), and if Tom brews them again, I guess they will be just as exciting. However, the real excitement – the thing that makes wild beer so special – is that even if they follow the same recipe, they will be very different. The beers are alive – that really is the joy of them – and as I wandered off into the night to find a bus, I felt pretty alive, too.