If you’ve just come for the food, jump down to Adventures in Fermentation for the pickling. If not, here’s a window on my pre-midlife-crisis.

I always assumed that I would breeze into my thirties without a care. That I wouldn’t allow the inevitable passing of years to perturb me. When I was five, I assumed I’d be nearly dead at thirty (no concept of time/age). At ten, I was going to be a child psychologist – in a bid to impress everyone I met with my faux worldliness and depth of feeling (‘I just want to help people’). By the time I was 20 – and after a brief dalliance with the idea of drama school, a year of service-sector work, drunkenness and beatboxing, and some time living in London wishing I was a grime MC – I slipped off to uni to pursue a social science degree. At this point, being thirty was pretty far from my mind. It seemed like a stale facsimile of youthful virility, with more responsibilities and conversations about financial products (pretty accurate, it turns out).

Last week, I finally hit the big three oh, and, whilst I’m hopefully not in the twilight of my life (as my five-year-old self may have assumed), I have reached something of a crossroads. When I sat down to write this post, I thought about starting it with a quote from someone famous. I had a look online, and turned up this nugget from the 19th Century American author Hervey Allen (me neither):

“The only time you really live fully is from thirty to sixty. The young are slaves to dreams; the old servants of regrets. Only the middle-aged have all their five senses in the keeping of their wits.”

My current contract comes to an end in November, with little chance of extension, and with a newly inflated mortgage, a second car on finance, and a taste for the finer things, I am living out the tension between existential fulfilment and cold hard pragmatism. A colleague and friend recently announced that she was off to re-train as a teacher in the north of England, and my first instinct was to feel envious. Not of teaching per se – though I have considered it – but I am envious that she has realised what she needs to do in her life, and she’s seizing it with both hands. It’s great, and I’m really pleased for her -she is not yet thirty and has managed to ‘live fully’ – in the words of ol’ Hervey – a whole year before she’s ‘middle aged’ – disgusting.

As I try to work out what to do with myself, and how to balance financial comfort with the creativity and freedom I crave, I am increasingly attracted to self-employment and food. When I interviewed the owners of East Coast Cured back in March, they extolled the virtues of taking the bull by the horns (not literally, they tend to work more with pigs). ‘The more you do, the more you can do’, they told me. I am passionate about food, and I love people. Cooking and eating make me happier than just about anything, and I continue to build my knowledge of food and the industry. It’s maybe not so mad that I might end up doing something in that vein. Maybe I’ll eventually take the plunge!

Another friend recently revealed that he too needs to escape the 9-5 and do something that makes him happy. He’s less committed to food, though his first suggestion was a niche dried meat company (which I’m not going to spoil for him by splashing it about the pages of this HIGHLY SUCCESSFUL blog). 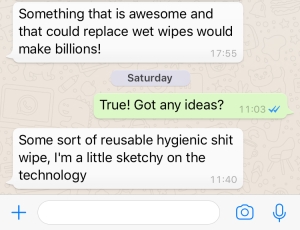 Incidentally, his second suggestion was plastic free baby wipes which is a) bang on trend, and b) something we have no knowledge or skills to follow through with (pun intended) – so you can probably have that one.

As I cruise into my thirties, I look at what I’ve achieved, and feel pretty content. I have gained three degrees (yes, I’m a doctor – no I can’t help you with that weird rash on your leg); married; bought, sold, and bought a house (not the same one – this isn’t an elaborate tax scam); and made a very minor contribution to the creation of a child (and a much larger contribution to his rearing). As happy as I am, I can’t help feeling like there’s an integral piece of the jigsaw missing. In avoiding becoming a ‘slave to my dreams’, I have prioritised all of the above over a career. That’s been a very conscious choice, and I regret nothing, but it has left me in the uncomfortable and unsettling position of reaching my thirties somewhat rudderless. The choices I (we) make over the next little while will be critical in ensuring I don’t reach my sixtieth birthday clutching the smouldering regrets of a midlife wasted.

In order to balance the heavy biographical angst above, I thought I’d throw in a short section inspired by an Edinburgh foodie who is making a great name for herself doing something she loves – Ruth from the Edinburgh Fermentarium.

I have been experimenting with fermentation recently – messing about is perhaps a better way to describe it. I bought Sandor Katz’s dense compendium – The Art of Fermentation – a wee while back, and set about reading it cover-to-cover. I guess I’ve read three quarters of it, and I am hooked on fermenting stuff. I couldn’t believe how easy it was to bang some bits in a jar, and produce something so delicious and healthy (depending who you ask). I have tried three different methods so far, all with great success.

The simplest, and most versatile, has been brine lactofermentation. In this method cold water is mixed with 2% of its weight in salt (e.g. 100ml water to 2g salt), and poured over sliced fruit or batons of veg (best to use spring water or dechlorinated water, since chlorine can retard the fermentation). 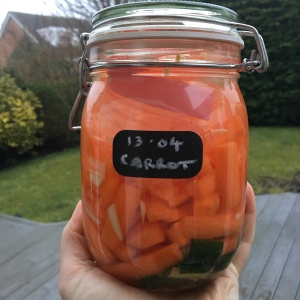 You can do this with anything really, and I have so far fermented radish, celeriac, chillis, carrots, and wild garlic (my chillis and wild garlic will become a fermented hot sauce soon). Sealed in a jar with the veg below the surface, this will be ready to eat in a fortnight or so. Be careful to release the pressure regularly in the first week so your jar doesn’t explode! (I used a different method for my second batch of kimchi, and it was nowhere near as good – ask me why if you’re interested)

If the brine lactoferment is the simplest, this is the most satisfying and tactile. I have used this method to make kimchi and sauer kraut. 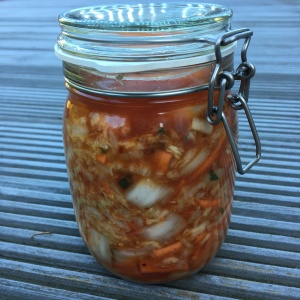 You want to be getting in about it with this one, mashing together cabbage with around 2% of its weight in salt (e.g. 100g cabbage to 2g salt), adding various spicy and umami ingredients to the kimchi and leaving the kraut plain, and then packing tightly into sealed jars pushed below the surface of their own juices. After 2-3 weeks you have a lovely young ferment which only gets better with age if looked after properly.

For my birthday, a pal gave me a SCOBY, or a symbiotic colony of bacteria and yeast (yum, right!?). Using this, I have started a batch of kombucha which involves slipping your SCOBY into cooled sweet tea, and setting aside for a week or so until it is sharp and acidic. At this point, it can be bottled and imbued with flavours such as ginger or mint, before a secondary fermentation (which makes it fizzy). I’ll let you know how it goes, but it’s exciting!

If you’re still reading, well done! Let me know if you try out any fermenting, or if you have any career advice!