Last week marked a significant watershed. For the first time since he was born almost a year ago, Cat and I broke free from the tyranny of our tiny human captor. For a whole evening. Together. Not content with this miraculous coup d’bébé, we doubled down – venturing out sans Boy again – this time midweek!

We’ve each done things alone without The Boy (I’ve even had to travel overnight with work a few times), but never a date night – never a whole evening. He has never been a great sleeper, and he’s a hungry wee bugger – so he would often wake ravenous in the early days, and only settled by feeding. Still, how can it possibly have taken a year to regain this minor temporary autonomy? How have we managed to suppress the deep yearning for those long-past heady days of boozy nights on the town together? To be honest, when you’ve been existing on less than five hours of broken sleep (a week…), and you’re elbow-deep in the by-products of a tiny body, it’s not the first thing on your mind. Up until now we’ve just been surviving. Little did we know that taking the time to reaffirm our relationship would ease that struggle.

The fact that it took us a year to get to this stage meant that it was both a momentous and liberating occasion, which thankfully passed without major incident. In some ways, I wanted things to be more difficult. I wanted our lack of adventure so far to be vindicated. I anticipated (with some degree of hope) a text or a call from a desperate babysitter to say that The Boy was inconsolable – that he had woken the minute we walked out, utterly lost the plot, and that no amount of crooning about the minutiae of public transport behaviours or geriatric farmers would bring him down off the ledge of his unmet need for paternal affection. We’d drop everything, of course, and – looking into the mid distance – proclaim ‘sorry, our child needs us’, before flouncing out in semi-faux panic. People would be left staring at the dust cloud hanging in our wake, and think ‘there go some damn fine parents’. I’d drive like a maniac to get home, where The Boy would collapse into my arms in an adoring heap, and sleep through until 8am (the most implausible part of this fantasy).

In reality, we enjoyed two lovely nights together. The first was a fantastic meal at The Gardener’s Cottage (blog post here), and the second a midweek wedding, where – despite being scolded for not bringing our infinitely more interesting son – we had a great time catching up with family, and dancing the night away. On both occasions we returned home to tranquil scenes. The first night – at Cat’s mum’s – The Boy had slept soundly until around 20 minutes before we got home, waking only to cry for a moment, and then babble away contently on Granny’s knee. The second night, and in our own house, he slept from 7pm-6am without a peep (much to my mum’s pleasure/disappointment – I half expected her to prod him awake for a cuddle). 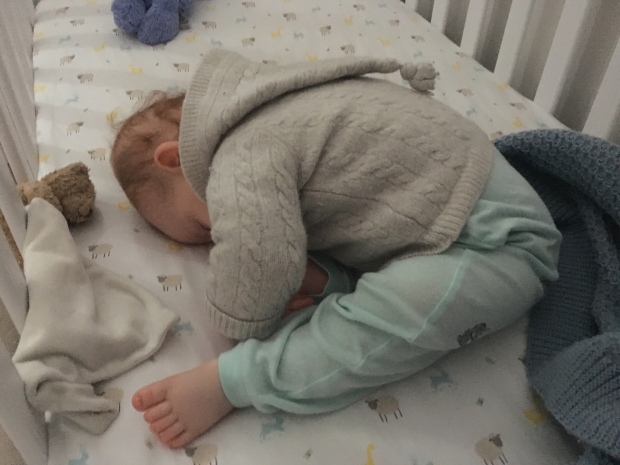 This is how he fell asleep last week. It was clearly all bit too much for him.

So why am I bothering to write about this? There’s no real story here. We tried to have a night out without our child, and – despite the all the many things that could have gone comedically wrong – we succeeded with absolutely no drama. We even managed not to check our phones every two minutes. We were left feeling as though we may have cheated ourselves out of an earlier resumption of something approaching normal service. How conceited we were, to assume that our child could only survive with a clear line of sight to mum and dad at all times!

The idea of leaving your child for the first time is daunting – and the stories which survive the rumour mill are often not the easy reassuring ones I’ve described. I thought it was worth putting down some thoughts on how you might approach your first night away from kiddo. This is not a ‘how to’, or even really advice, it’s just some observations from my own experience which I’d have appreciated earlier.

I’d love to hear your experiences in the comments – and any tips you might have for us over the coming weeks and months, as we continue to experiment with being real people  again (independent of The Boy).

This week, I’m out on Friday night to review a restaurant for Bite Magazine, and Cat is out for a hen do all day and night on Saturday. The latter will be a real test – The Boy still refuses a bottle, so here’s hoping he’s as agreeable for me as he was for his grannies. It feel as though we’ve broken the back of something, here. Like we might be making a dent on the lost sense of autonomy I wrote about a few weeks back. It seems beguilingly easy so far, but I suppose time will tell.